February 18, 2012by Peter Habicht4 comments
Share:FacebookTwitterEmail
This year’s race at Circuit of The Americas will be a landmark event in the history of F1, and while the venue and fans will help form a new home for the sport, a significant part of what will ultimately drive the sport’s growth in America will come from the partners and sponsors that use F1’s global reach to brand and market their products and services.

Formula 1 is typically a closed shop, meaning the business of F1 isn’t usually open for discussion with outside parties, but it is important to hear some American corporate perspective and testimonial to the value F1 brings business. We rarely get a view of F1 from the companies whose investment creates the necessary finance for the sport, but recently I enjoyed an informative and enthusiastic interview with Jane Johnson, Director of Communications at SunCore Solar, a privately held mobile solar technology company, and a sponsor last season with Lotus Renault GP (now Team Lotus). Your thoughts and comments are appreciated below.

Special thanks to Jane Johnson and SunCore’s CEO and co-founder, Steve Brimmer, for their contributions to this interview.

I appreciate your time to answer a few questions for ‘F1 in America’. Can you tell us about SunCore and the goals it had in mind when choosing F1 as a marketing platform?

To our targeted audience Formula 1 easily represents the pinnacle in motorsport, the foremost of sports. It is understood F1 leads in the development of superior automotive science and technology, with a continuous advancement of high performance aerodynamics and material utilization which commands respect by fans and casual observers alike. By associating with a progressive F1 team, SunCore believed it would increase its own global visibility, brand credibility, marketing & business development opportunities.

Was there something unique about F1 that set it apart or were several other types of platforms (including motorsport) considered?

F1 is widely recognized as the most technologically advanced motorsport series in existence, in addition to it commanding the largest global broadcast and print media audience, thus it was the logical choice for us, given that we see ourselves as equally advanced in our technology development.

Could you describe SunCore’s involvement with Lotus Renault GP and F1 in 2011?

Our involvement was limited to five races due to budgetary restrictions although we had hoped for a much longer involvement. We found the team to be of the highest caliber in every aspect and we had a great experience with them before, during and after the races.

How did you rate and measure the benefit of SunCore’s participation given the large financial involvement F1 is known for requiring?

We learned that to fully benefit from F1 involvement, one needs to pre-plan a full season in advance, in order to fully derive the maximum available benefit. Once the season starts, things move very fast, so clarity of what each race can provide for exposure and hospitality benefit is absolutely necessary, before you arrive at the circuit. As such, we were honored to receive the exposure we did through our association with the team.

Were there any intangible or latent benefits you weren’t expecting?

Yes, direct contact with race fans was a pleasant surprise. We received many emails from fans who sought us out, which we appreciated a great deal.

Do you feel there is anything Formula 1 as a whole could do to increase the value for American corporate sponsorship?

Television coverage in the U.S. market is still lacking. The Speed Channel F1 race coverage team do an excellent job of educating viewers about the sport and covering the races, but the fact is that the races are poorly promoted by the networks including FOX when they broadcast a select few races each season. SPEED Channel is 90% dedicated to NASCAR and thus F1 suffers from trying to squeeze in between the NASCAR events and daily feed of NASCAR promotions and sin-off programs. We were amazed at the high profile F1 has in global broadcasting including new markets such as Korea and India. U.S. viewership simply cannot mature until one of the networks make the commitment to carry and promote the series…much as did ABC in the 60’s and 70’s with its Wide World of Sports weekend series. Most of today’s baby-boomer generation knows F1 only as a result of ABC’s coverage in those decades.

I understand SunCore is taking a break from Formula 1 this year, but now that the sport is coming back to the US and with two races scheduled for 2013, how does that affect the company’s decision to reengage with F1? Keeping in mind that Austin has developed into a hub for green businesses and the New Jersey race next year has been billed as green-friendly with the exclusive use of public transportation to and from the track.

We intend to be back in F1 in 2013, not solely due to the Texas and NJ races, but because it is good for our brand and Company identity. Of course, the Texas race in particular provides us an excellent opportunity to maximize our benefit, as we have relationships with the Texas State Officials as well as with Rice University and we can resonate with renewable energy programs in Austin and elsewhere in the State of Texas. Having home Grands Prix is a bonus for a sponsor, but certainly not the singular motivation for being in the sport.

American Alexander Rossi is currently linked with SunCore on his website and appears to be headed for a drive in F1 in the near future. How do US companies like SunCore value American drivers competing in the sport?

We sponsored Alexander for the 2011 season in the World Series By Renault 3.5 where he finished 3rd. Our intention and motivation to becoming involved with Alexander was rooted in a desire to support an American driver who we see as having the skill set to attain a ride in FI. Of course, while we are presently team-centric in our F1 sponsorship plans, with Alexander it was purely him and independent of the team he was with, in this case Fortec. We realized a considerable amount of exposure with Alexander in 2011 per dollar invested, as the Series is vastly more economical than FI, we had a great experience overall. We would like to stay with Alexander as he migrates upward to F1 as we see him as an extraordinary talent.

Thanks again for your time to answer these questions, Jane. In an earlier conversation you mentioned that you’ve become a big F1 fan in the last year, what was the highlight for you last season?

Everything! Our team involvement led to many opportunities that the general fan cannot access. At each circuit the energy generated by all the F1 teams is nearly overwhelming, an immediate simulation of all your senses. Suddenly you’re welcomed as a team member enabling a very personal bond, even a link to other F1 team drivers. At home I continue to feel a personal association with our team, enough to make me stay-up all night. An extremely important component in the puzzle of becoming a true F1 fan is the ability to share the experience with others. For me it’s my brother. He’s the only person I knew that doesn’t mind a 3am phone call because he’s also up watching F1 qualifying or a race.

Lastly, Will you be going to the race in Austin in November? 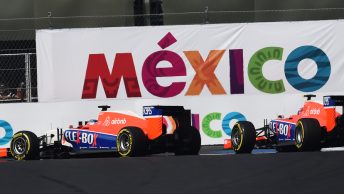