SPEED’s first-ever live coverage of this year’s Bathurst 1000 V8 Supercar race recently introduced Americans to an exciting and competitive racing series abroad, while showcasing a stock car series that has great appeal with NASCAR and F1 fans alike.  In a country where NASCAR dominates motorsport headlines and broadcasts, V8 Supercars are positioned well between these two groups of fans in the US and make for plenty of new connections and conversation between them.

To cover the race, SPEED sent over NASCAR ambassador Darrell Waltrip to Australia, and their decision to do so was well rewarded before the race even began.  The stock car champion took the passenger seat for a hot lap around the 3.9 mile circuit in the right hand drive Holden of Jason Bright, an Australian who competed against Mark Webber in Formula Ford early in his career:

Darrell Waltrip on the ride of his life around Mount Panorama

In this video, if DW’s eyes didn’t tell the story of the ride in a V8 Supercar, his commentary did, and what he said certainly wouldn’t remind anyone of a race he called recently.  For fans of Formula 1, it was refreshing to see someone used to ovals experience the twists and hills normally associated with a grand prix circuit.

Back in the announcer booth, Waltrip’s familiar “Boogity, boogity, boogity, let’s go racing boys!” was on cue at the beginning of the race, although this time from a standing start.  It was great to hear DW get into his familiar rhythm calling the race, pointing out the different sponsors (even explaining what a ‘fair dinkum’ was), while talking about stock cars equipped with real time telemetry, center lock wheel nuts and wet racing tires – all familiar to fans of Formula 1.

Even if cars with fenders didn’t look familiar to open wheel racing purists, the liveries on them did, and Team Vodafone stood out as a familiar sponsor logo throughout the race.  Earlier this year, Team Vodafone McLaren Mercedes driver Jenson Button took the MP4/23 out on track to set a new course record and swapped cars with driver Craig Lowndes for an event similar to the Mobil 1 seat swap held this year with Tony Stewart and Lewis Hamilton.

This year’s race started ahead of the Japanese Grand Prix, which many F1 fans in the US watched live, and due to the 1000’s late finish, Americans tuning in for the start at Suzuka caught a dramatic race to the finish line.  Not a bad introduction to the US as the V8 Supercar series gears up to visit the purpose built F1 track at Circuit of the Americas in 2013.

V8 Supercars are a great show for all fans of racing, and the next race takes place this weekend with drivers from F1, NASCAR, Indycar, Le Mans and other series competing at Australia’s Gold Coast, and will be shown live this Saturday evening on SPEED. 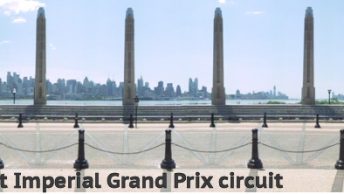 A Visit to the Port Imperial Grand Prix Circuit Part 3: An Interactive Guide

A Visit to the Port Imperial Grand Prix circuit Part 2: A Drive to a View