While McLaren has been competing around the world in Formula 1, they’ve been growing into a group of companies involved in and around racing of all types, developing processes and technologies that have been embodied in their latest creation, the MP4-12C. 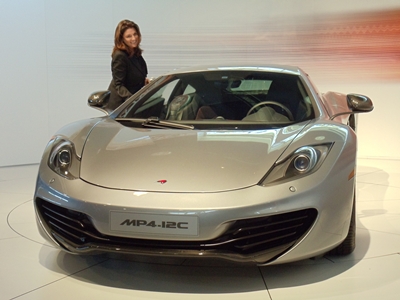 While McLaren has been competing around the world in Formula 1, they’ve been growing into a group of companies involved in and around racing of all types, developing processes and technologies that have been embodied in their latest creation, the MP4-12C.  A long awaited sequel to their F1 road car, this McLaren comes at the conclusion of a long relationship with Mercedes as a development and assembly partner on their SLR road cars.  I recently had a chance to meet McLaren’s North American team in the process of opening 10 US dealerships, and learn more about the car that will be reintroducing a brand known for pushing automotive technology to the limit.

The first thing you should know about the car is that it is different – from everything else before it.  Everything on the MP4-12C has been designed and developed by McLaren:  From heater vents to headlamps, every part has been designed and built especially by and for McLaren Automotive.  Considered the ‘middle sibling’ of two other cars due out in the coming years, this is the first of these new McLarens to be released, and the numbers are impressive.

A 3.8 liter twin-turbo V8 produces 592 bhp and 443 ft lb of torque, 80% of which is available at 2,000 rpm.  A seven-speed seamless shift dual-clutch gearbox and best-of performance in emissions gives this car claim to the highest horsepower to CO2 emission ratio of any other internal combustion engine car. ‘Brake steer’, developed on McLaren’s Formula 1 cars, limits the degree to which the inner rear wheel spins under light cornering load.

Given what it takes to develop a modern day Formula 1 racing car, it’s not surprising that McLaren Automotive has also paid the same attention to detail to the MP4-12C by using a lighter Lithium Ion battery, carbon fiber monocell structure, aluminum front and rear sub-frames, and SMC (sheet molded compounds) on most body panels to reduce the weight of the car to 2,866 pounds.  “Accessible Performance” is used to describe the goal for the car, and while enthusiasts may appreciate the rear airbrake, active suspension and lightweight package, the car’s interior and driver visibility make for a livable performance car on a daily drive.  Headroom wasn’t a problem for me at 6’4”, and low front end bodywork along with a driver friendly display and gauge layout made visibility easier.

That said, track days are certainly part of MP4-12C’s repertoire with front and rear facing onboard cameras, data acquisition and adjustable suspension for documenting and shaving tenths off fast laps.  Various add-ons are available to suit buyers’ preferences through the optional ‘IRIS’ system, which includes an integrated PC with an 80G drive on the options list.  Sat-nav and wireless LAN connection will put you on a map, update your email inbox, and upload your hot laps while you’re smoothing out the kinks on the Corkscrew.

No, these options weren’t available on the original F1, but they do make for an interesting update from a manufacturer that set the standard for supercar performance over a decade ago.   The MP4-12C marks a significant return for McLaren, and the automotive world is looking forward to seeing more from them in the new year.